UNO is a shedding-type of card game that is originated in America and is played with a deck, uniquely designed. With over four million players, Facebook Messenger UNO Online Game Is of no doubt one of the most-played games in Facebook Messenger. 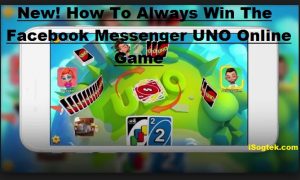 The number of cards in a UNO deck is 108 cards, consisting of various kinds of the card with different functions.

Special Cards and their Uses

Skip – Next player in the sequence is jumped over or skipped.

Reverse – The way of play changes direction (either clockwise or anti-clockwise).

Draw Two – Two cards are added to the next player, and he’s skipped.

Wild – You can determine the next color be played with this card.

You play cards either by similar card numbers or similar colors apart from wild cards. You The Facebook Messenger UNO Online game is set for three minutes. To win you would have to get rid of your cards or have the fewest points in the end. Other players scores would be calculated from the remaining cards in their hands. The player with fewer scores as I will rank higher.

Here you are playing alone. Ensure you make use of all the special cards first, most especially when it less than 1:30 minutes.

You’re playing with a partner in this section. Ensure you make use of all your special cards, so you give the other team are having a hard time and also pay attention to your partner’s card.

Just in case your opponents have made it hard for you, all you have to do is concentrate on your partners game. Don’t play for yourself but for your partner.

Cheat! How To Get Unlimited Coins On UNO Facebook Messenger Card Game

You have to on watching the boring adverts, you get 100 coins for that. Or you can also click your profile and claim some coins.

I believe you have learned all the Facebook Messenger UNO Online Game Hack and Trick.

Thank you very much for reading. Don’t forget to share so you can also help a friend to win UNO!