Golden Boot game is fun and addictive Facebook Messenger game, from the makers of The well-known Top Eleven – Be a Football Manager.  Your goal in this game from Nordeus is to try to earn as many points as possible by direct the ball to the goalpost, either in a solo play or in a duel against a friend. You can quickly launch this game in any conversation or create a group chat with your friends just for playing the game, making it easy to keep track of anybody’s score. 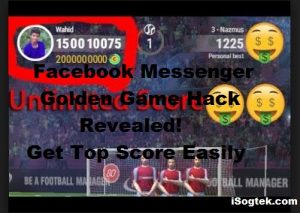 I believe you are competing with your friends to win without stress continuously.  That’s where our Facebook Messenger Golden Boot Game Hack can help you much; you can’t get this anywhere!  You’ve read this article to the end to discover cool hack and tricks, and don’t forget to share this article.

Kick the ball into the goal, get awarded with fifteen points, except you kick it to particular areas. The moving 25-point circle in the goal post would earn you 25 points. You’re awarded 75 points kick the ball to the lower-side corner, and 90 points when you play the football to the upper-side corner of the goal. For the top portion of the middle of the target, you’re awarded 40 points.

After you kick the ball, you can change its trajectory by swiping it to where you want it to go. If you want the ball to turn quickly, swipe it multiple times. You can also swipe it again to change its direction again. Most times, an S-shaped trajectory can distract the keeper entirely in an attempt to block your strike.

At the early stage, you would have no defender or goalie in the pitch, so this is good to practice and experiment your aim and swipes. Once the goalie comes around, you can strike in ways which would trick him; you can aim for corners and increase your points.

When the defenders start showing up, it gets a little bit tricky. Kick the ball way off the side that is open, and they’re defending less. Then swipe the opposite way immediately to change the direction as fast as possible. This always fools the goalie, and it would be hard for them to block the ball, allowing you to get more points.

When you go further into the game, the 25-point circle turns to an 80-point ring, which would give you more points. It would be the same size but with higher marks. Be attentive to where it is so that you can strike the ball into the circle as often as possible get a high score.