Cursed Season 2 On Netflix  – We’ve seen so many series from Netflix this year but none like Cursed. We’ve also gone through different versions of the Arthurian and Merlin mythical legends but no one has a storyline that doesn’t center around Arthur or Merlin.

On the first look at the Netflix series, Cursed, no one would have thought its main character will be the Lady of the Lake, Nimue who has always played a vital role in all Arthurian legends but never the main role. 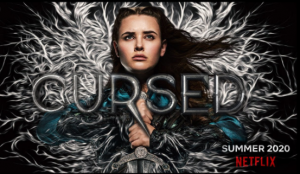 What the Season One Was About?

We also witnessed the sword of power, which might be the Excalibur work its wonders in a rather destructive way as its powers seem overwhelming for its various wielders. Mysteries were revealed, a lot mind breaking and a few mind uplifting.

A retired Merlin apparently has an offspring, Uther is as menacing as ever, Nimue looks dead, Morgana’s role is still in the making and things look unclear, Arthur the nobody might be the only hope the Fay now has as he has made some very strong allies.

The Church is unrelenting on clearing magical creatures (The Fay) off the face of the earth and apparently there is a new true King challenging the reign of King Uther, what more could you ask for?

Season 2 Plot and What to Expect?

The final episode of season one was epic, its ending caused a lot of mixed feelings. We got to see an arch-enemy of the Fay die in the person of Father Carden but our main character might also be dead. Nimue who got shot by Sister Iris who is bent on making the church proud of her.

Arthur has made new alliances with warriors who appear to be The Vikings. I don’t know if it was just me but there was something about the way the Red Spear looked at Arthur after he saved her life.

Season 2 will reveal more mysteries behind Nimue’s death, probably this might be the point where she becomes the infamous Lady of the lake. Being the main character we won’t expect her death to be that easy given that the Fay might very much still need protection.

A heartbroken and angry Merlin now wields the sword of power who might also be revenge bound given the conditions surrounding his daughter’s death. The Weeping monk rebelled against the church in order to save Squirrel (Percival) who has now been revealed as Sir Lancelot.

Sister Iris has taken a more dominant role in the church’s crusade against the Fay after apparently killing Nimue. Season 2 is just gonna be awesome.

There are also no actual trailers released yet since Netflix has not announced if there will be a season 2 still.

Judging from past experiences, we should be expecting an announcement if there will be season 2 by mid or late next month (August).  Guess Cursed would just have to join a long line of TV series whose next seasons we are expecting in the likes of Money Heist, Lucifer, The Witcher, Warrior Nun, and so on.

All things being equal not considering the pandemic and lockdown, a new season of Cursed should be released mid next year.

The first season of Cursed is clearly just the starting point of this interesting TV series. Season 1 Episode 10 clearly started out the course of this mythical story and we can’t wait to see more.

What happens to Nimue? How Arthur’s new conquest does work out for him and the people around him? The Fays had never had so many enemies speaking of the Church, King Uther, and the New King who claims to be the one true King.

Money Heist Season 5 – Everything You Need to Know

The Witcher Has a New Prequel TV Series

All You Need To Know About Facebook Messenger The Test Game