Best Movies For Weekend – It’s another weekend and you are beginning to get the feeling it’s not going to be interesting as the past ones. Staying at home is going to make matters worse but you’ve got no choice, we are under lockdown.

Also on weekends, people tend to be unrealistically free and bored. Why not try watching movies. I know what’s on your mind right now, where do I start from? Like what do I even watch, I don’t even know what movie I feel like watching?

The thing with movies is you can’t find a perfect one. Every one of them is perfect in their own way. You are about to find that out with the list of best-suited movies for this interesting weekend. 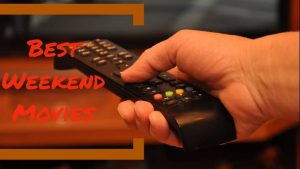 Although this list is going to be about recent movies, it’s going to take you back In Time and enlists some old movie classics. Sit tight and Choose your Weapons.

First on our list is a very recent movie in fact it was released this month. Starring Tom Hanks as a Christian commander of a Ship convoy carrying supplies to Europe.

The real actions start when they get to a point at sea where the American Air Force can’t protect them from unrelenting Nazis. The battle scenes become really epic as a lot of lives and the aim of their mission depends on Tom’s decisions.

Ever wondered what a war movie in ships would look like, try this movie out.

Starring Leonardo Dicaprio (The Wolf of Wall Street) and released in 2010, this movie is all about how the minds operate when you sleep. It takes the concepts of dreams and analyses into bits that are so simple yet complicated.

Inception by the act of this movie means the ability to conceive something in someone else’s mind.

See and grasp the life of the most highly profiled England investigator and detective. But as brilliant and good as he is, he still suffers from every man’s doom, a woman.

If you love crime movies and unreasonably brilliant detectives that contain mind-blowing schemes and brilliant minds, try out this movie.

This is another very new movie and it’s the perfect action movie for the weekend. A group of heroic immortal mercenaries with the super-healing ability gets set up by people who are unto their secret. As if that was not bad enough, a new person like them just popped out from nowhere.

Things get worse when apparently their lives are at stake. This is one of those Netflix Original movies you could describe as full action-packed. Every second you spend on this movie will surely count, trust me.

It’s currently ranking as one of the best movies for this week and might not leave that position except a new movie as good as it comes in next week.

Do you like Fifty shades? Because if you do, you would love this and at the same time it will leave you suspenseful. A lady trying to save her relationship goes on a date trip with her supposed boyfriend and gets kidnapped by an Italian mafia lord.

Being kidnapped, she is given 365 days to fall in love with the mafia lord and clearly she has no choice. The question right now isn’t if she fell in love, it’s how and why she fell in love.

Starring Will Smith and Martin Lawrence as cops who battle a hardened Mexican cartel assassin, this action-comedy movie will make you laugh hard. Ordinarily, by identifying the casts mentioned above, you should be able to conclude that this movie is the best to get you out of that boring bad day you are having.

It was released earlier this year, January to be exact and to date, it’s still one of the year’s best.

7. All The Right Places

This 2020 romance movie stars “Pokemon’s” Justice Smith and Elle Fanning as lovers who live each moment as if it were their last.

Hint: If you haven’t seen Pokemon, that’s very bad of you. Common, it’s not on this list but it’s still one f the best movies from last year.

This love story isn’t just about living moments and enjoying the newfound love, it is also about being able to overcome your past troubles emotionally and physically together. That is the power of love and this movie explores every part of that.

Warning: Before you start off with this movie series, ensure you’ve finished every series from Harry Potter. This 2016 movie is a spin-off as well as a prequel of Harry potter.

In simple terms, it was released after the Harry Potter film series ended but it’s story-line happened before that of Harry Potter’s. Directed by David Yates, this movie tells the magical story of a timid yet brave Newt Scamander (Eddie Redmayne).

It currently has two series, the 2016’s titled Fantastic Beasts and where to find them and one released in 2018, Fantastic Beasts: The Crime Of Grindelwald which is a sequel of the first one.

A true-life war movie that describes what war looked like for the U.S army in Afghanistan whose situation one could describe as handicapped. Outposts are U.S camps located in Afghanistan, but this certain camp is located in a rather open and dangerous place where it makes them very prone to attacks.

Hell broke loose when one of the largest Taliban surprised attack was launched and. This movie tries to tell us what the soldiers went through, every impossible task they had to achieve, and the effect it had on them.

At a certain point in the movie, I felt like I was one of them. It was so real that I began to ask myself how the hell this really happened to Soldiers.

10. Sherlock Holmes: A Game of Shadows

Remember at the top, a Sherlock Holmes movie was listed and if you’ve seen it already, you should know that this is its sequel. This movie stars Robert Downey Jr as Sherlock Holmes (Ironman), Jude Law as Dr. Watson, Sherlock Holmes Side-kick, and Jared Harris as Professor Moriarty.

This movie tells the story of what happens after the first Sherlock Holmes movie as the detective investigates a series of bombings and deaths that lead him to his greatest adversary. This adversary is not the average or regular man but just as intelligent and brilliant as the invisible Sherlock Holmes.

Sometimes I’d wonder how there is not a sequel to this movie, it’s just annoying. Starring Hugh Jackman (Wolverine) as Van Helsing and Kate Beckinsale, this classic supernatural movie is epic.

Van Helsing, a known and feared monster hunter is sent to Transylvania to kill a special kind of monster, Dracula. But this monster is unlike anyone he has hunted before as there is so much that connects him to this special monster.

A marine comes back to his wife after a long while, just when the fun was beginning to start, he gets murdered alongside his wife. Somehow he gets resurrected with cool superhuman powers enhanced by nanotechnology.

At first, it would seem like he doesn’t remember anything until his memories started flooding in. At this point, you just don’t want to be the person who killed his wife. This movie was released this year and stars Vin Diesel as Bloodshot.

You must forgive my manners for not adding any horror movie since the beginning of this list, I am not really a fan of horror movies. Well, here is the first one and the last movie on this list.

This 2020 box-office hit tells a story about a crazy scientist who killed himself and comes back to terrorize his girlfriend after leaving a huge amount of money to her. The stalking and terrorizing keeps getting worse and more terrifying at every chance. Until the frightened girlfriend decides to take a leap of faith after no one would believe her stories.

This is the best list of movies you could see this weekend. With this list, there is the assurance of an exciting weekend ahead.

How Do I Get This Movies?

Okay, before we call it a scene here, that question might be on your mind. I have got just the best options for you.

Netflix. Tap on any link that best describes your Question;

Netflix In India – Everything You Need to know

Also, there is the option of free movie sites that offers all of these movies and more for free. All you need to do is visit any of these sites or apps and download the movie directly to your device for free.