Facebook Messenger 8 Ball Pool: Pool is a game of billiards played on a rectangular table having six holes arranged by the side of the table with usually fifteen object balls. Since you’re playing it on your Facebook Messenger (online) you don’t need a table, a stick or a pro to play the game. 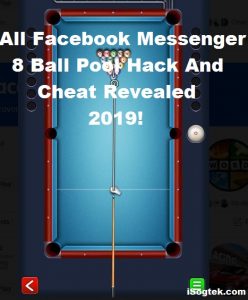 If you want to defeat all your opponent in the Facebook Messenger 8 Ball Pool without going through unnecessary stress, you have to read this. Hack, Tricks, and Cheats revealed!

Being on the safe side of the board is essential. It’s very simple to pot 5 or 6 balls after the break, but most times you may encounter some problems. That’s where the structure is gone. If you’ve messed up after clearing the table of most of your balls and left your opponent a quite easy table. You can shun this by pinpointing the balls in awkward positions early on and try to shatter them up so you can pot them easily or play a safe game to push your rival to make a mistake and take advantage of it.

The critical step to being a professional 8 Ball Pool player is positioning. The positioning of the cue ball is important and maintaining strict control over where that cue ball is at all times. Don’t shot the balls as your life lies on it.  Make good use all of the time given to you and think about not just the first shot, but the last shot you plan on playing.

The level of power you use in your shot is always highly significant. If the ball is close to the pocket, using a low power shot will be the best solution. Don’t try for longer shots with a lot of power. Otherwise, there’s a broader chance the ball won’t go into the pocket. Practicing, as they say, will make you perfect, so you need to do that in other to decide how much power you need to use in a shot.