How to Make 4g Faster On Android – Prior to the development of 4g, we had the 3g which we never knew was slow until we came upon 4g. At first, 4g was fast and yeah, we all liked it but to an extent, it’s beginning to get slow and no one is liking it. 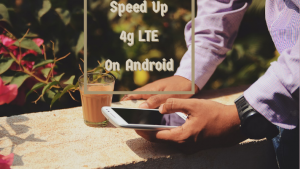 So how do you speed up an internet connection on an android device? How to make 4g faster on android devices is a simple question given the fact that the 4g network is already fast.

The only reason you’d be reading this guide is that you want to speed up the 4g connection on your android device. Well, we’ve got tips that will surely work.

Tips To Speed Up 4g Internet Connection On Your Android Device

Your device runs on 4g that is fast enough to do anything you want on your device. That’s as fast as the 4g LTE network can function unless of course, you are looking to get a device that supports the new 5g network.

The only thing that can be done is to Improve your 4g Connection.

Simple Ways to Speed Up 4g On Android

Go Outside: That’s not just a song’s name, it’s one of the commonest ways to solve a slow 4g network. A lot of stuff like metals, walls, people, glass, and so on could obstruct network connection.

Ensure Your Device is Functioning Well: A fast network on a slow or faulty device is vanity. Before you complain of a slow 4g network on your android device, make sure the phone isn’t slow or faulty.

Clear out browsers cache, close background apps, ensure your device storage space isn’t filled up with useless contents, and regularly update your device’s OS. Anything to have a healthy phone, that’s the trick.

Restart your Android device or switch to Airplane mode for a short while.

Signal boosters do not work on Wi-Fi connections, only on LTE and it amplifies the slow 4g signals your android device is receiving.

There are lots of Signal boosters you can try out. Examples include Wilson Pro, Sure Call, weBoost Drive, Cel-Fi Go, HiBoost Home, and so on.

10 Windows 10 Tips and Tricks You Should Know