Google One, one of the numerous subscription programs under Google’s services has added a new feature that upgrades its storage system. This update will bring free phone backups to Android and IOS devices that had to be paid for previously to be accessed.

The free backup feature was previously only exclusive to its paid members. Google offers cloud storage by default of up to 15GB, but that’s only if you use Google Drive or Gmail and you’d still have to apply for paid plans. But the Tech giant also knows that it’s very possible you will need more so hence Google One and its paid plans. 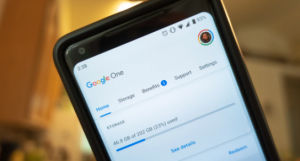 The Importance Of this New Feature

This feature will surely make using smartphones whole lot easier especially for Android users who unfortunately do not have a very supportive cloud system as IOS users. Thanks to Google Play, some Android users can boast of a cloud system that could back up their device’s data to Google drive but this cloud system is not fully functional.

Google drive does not really back-up MMS or media contents, it does mostly office files and related. This is one of the clear importance of Google One and some of the qualities that make it Google’s super cloud system.

It presents a convenient way to back up device data such as apps, media contents, text messages, and so on. In addition to the fact that this feature is now made free, it’s also automatic and functions by default.

Furthermore, this now made free back-up feature now comes with a storage manager that is available on both the mobile app and its webpage. A storage manager as the name implies basically lets you manage your data from all Google services through Google One.

How to Get the Free Back-Up Feature

The catch to this new feature is to download the Google One app on your device. Android devices shouldn’t have a problem with that. Just visit the Google Play Store and locate the app.

IOS devices although might encounter some issues however Google said it plans on launching a Google one app for IOS devices soon. It’s just a matter of time before you get to see a Google One app on the Apple store.

The free 15GB cloud storage is for all data you own across all Google’s services i.e Gmail, Google Photos, and so on. Too small, why don’t you try out Google One’s paid plans starting at $1.99 for 100GB.