Google Hangouts Desktop App – I would want to give you some basic information about Google and its users so you can appreciate the building of the Google Hangout Desktop App. For a better understanding of this App, I would go in detail on what is Google Account?

Google Account is said to be a user account that is required for one to access and obtain the authenticity and authorization to certain Online Google services. These services include the following Gmail, Google+, Google Hangouts, Blogger e.tc.

It is worthy to note that they are a wide variety of Google products that render services to Google customers or users. Such as Google search, YouTube, Google Books, Google Finance, Google Maps, hangouts chat desktop app, Google Drive. 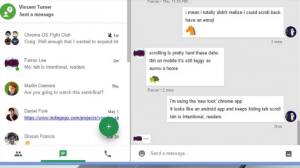 Google Hangouts is a communication platform built by Google to render services such as messaging, video, chat, SMS and VOIP (Voice over Internet Protocol) features to Google Account users.

The Google Hangouts is a Google product that replaced three messaging products of Google which include Google Talk, Google+ Messenger (formerly: Huddle), and Hangouts, a video chat system present within Google+.

Other Features Of Google Hangouts

Google also has stated that Hangouts is designed to be “the future” of its telephony product, Google Voice, and has already integrated some of the capabilities of Google Voice into Hangouts. Google Hangouts is a useful audio and video meeting for people.

It also offers a free and relatively easy way to meet with colleagues, supporters, people from other organizations over the web. Hangouts can be run on PC operating systems and using the smartphone app on Android or iOS devices.

Like earlier stated for you to benefit from Google product known as Google Hangouts, first, you have to join Google by opening an Account.

However, only the organizer of the call or meeting of some group needs to have a Google account, a phone, and a computer. Participants can be invited in as guests using just their e-mail address or through a link to the Hangout.

How To Use Google Hangouts

A user can use Hangouts to start a conversation or video call, make phone calls, and send messages using Goggle voice or Project Fi phone number. It is pertinent to note that Hangouts sync automatically across devices.

If you start a Hangout on your computer, you can continue your chat on another device, like your phone. As a Google user, you can access your Google Hangouts through any of these platforms, hangouts.google.com, Gmail, Inbox by Gmail, Hangouts Chrome extension.

How To Use Google Hangouts on Desktop

On a computer, you can access your Google Hangouts;

How To Use Google Hangouts Android App

On your Android phone or tablet;

How To Use Google Hangouts App on Your iPhone or iPad

Thus, you have seen how to access Google Hangouts as a user of Google Account. You can fully enjoy this by having your digital devices such as a computer, Android phones, iPhone, or iPads.

This is only possible by having Hangouts apps on either of these devices. In that vein, you can also automatically sync devices across. This will lead us to have Apps like Google Hangout Desktop App, which is the next thing we are to discuss.

How To Use and Download Google Hangout Desktop App

A look above would point out to you that as a Google user who is using Google hangouts product that Hangouts can sync automatically across devices. Thus on that note, Google Hangout Desktop App is the medium to use Hangout on the Desktop (computer).

This you can get by downloading Hangout chrome extension or Hangouts Chrome App to your computer, then click Add to chrome> Add. Then the extension or app will automatically open.

Thus, you can then access your Hangouts from the computer from this point henceforth by following the various steps you would see.

Google Hangout is an instant messaging app by Google to connect people all over the world. All you need is a google account and its services are at your fingertips.